This is my son's fourth year of playing football. He is 13 years old. Last year he was able to be one of the fastest runners/sprinters in the team. Also, we were involved in football clinics, such as receiver camps and his running was excellent.

One month before the football pads came on, I noticed he started running a little funny. For example, instead of sprinting like he normally would, he was now running in a marching form (not sure if that makes sense). Instead of running like a normal sprint in the past, he runs with his knees higher up.

Other coaches have approached me asking me if he hurt himself or if the pants are too tight. I told them no, because he runs the same way without the pads. He is a normal growing boy at 5'3 123lbs.

He has no pain in his joints. I was an athlete myself in high school and have been involved in coaching youth football for over 4 years and have never seen anything like this.

Do I need to put him in a yoga or pilates class??? Any recommendations would help!
Thank you,
Juan 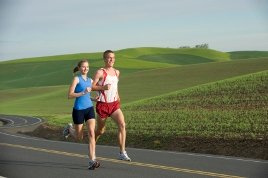 Thank you for your question about your son's running form. As a parent, I sense your concern and frustration about this.

Is his "new" running form something he is doing all of the time, not just at football?

Then my first thought is that the normal changes (increased muscle, height, etc.) that occur during the adolescent growing years could be the cause.

However, seeing that you've coached youth football for 4 years and haven't seen anything like this before makes me think that it's not the likely cause.

You mentioned that he isn't having issues with joint pain but has he ever mentioned back pain, foot or heel pain? I ask this because very recently my 10 year old son was having pain in his heel when he ran and it caused his running form to change quite a bit (picture zombies running down a street). I would definitely ask him about it just to rule out that possibility.

Without first knowing what is causing the issue, I can't say that putting him in a yoga or pilates class would be helpful. So, with that said, I would recommend taking him to see a sports medicine doctor. A sports medicine doctor will be very helpful in determining what the cause might be, treating the problem (if there is one) & helping him get back on the road to his old running form.

Sincere wishes to you & your son,
Anissa

Join in and write your own page! It's easy to do. How? Simply click here to return to Running Injury Helpline.